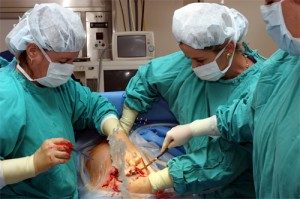 As of Wednesday, September 8, 2012, the verdict was still out concerning a medical malpractice lawsuit filed against a Windsor obstetrician who allegedly failed to properly care for a patient after a caesarean section. Six years ago, Dr. William Mundle delivered Sonia Benard’s second child on Sept. 20, 2004 via caesarean section. Shortly thereafter, Benard suffered a heart attack, which resulted in an emergency removal of her uterus, rendering Benard unable to have more children.

Benard filed a medical malpractice lawsuit against Dr. Mundle, claiming that the doctor was negligent in noticing her condition before leaving the hospital after her delivery. Benard is suing Dr. Mundle for $250,000.00 for pain and suffering and her inability to conceive more children. Benard’s husband is suing the doctor for another $50,000.00 for loss of companionship and care. According to the medical malpractice lawsuit, Dr. Mundle did not accurately estimate how much blood Benard had lost during the delivery process and claims that he should have seen that something was seriously wrong with Benard when she was observed to be in and out of consciousness and pale after a couple of hours after the caesarean section birth was completed.

Dr. Muncle and other medical staff testified during trial that proper procedure was followed during the delivery and that there was no reason to believe that the mother would have lost an excessive amount of blood, which as it turned out was approximately two litres. After the delivery, Dr. Mundle thought he had left a stable patient only to be called back to the hospital some five hours later to attend to Benard’s declining condition, which included an episode of cardiac arrest as a result of loss of blood. Benard’s condition was so serious that she actually died in the hospital but was brought back to life prior to the performance of an emergency hysterectomy. The hysterectomy was necessitated by the condition of her uterus, which was reported to be “dark, enlarged and grey.”

One expert witness for the plaintiff stated that Mundle should have know that Benard was bleeding and taken proper action. Mundle countered that it is natural to feel uncomfortable after undergoing major surgery and that Benard’s heart rate had remained high throughout the pregnancy and that
her blood pressure, though low, was still within the normal range when he left her. Plaintiff’s medical malpractice lawyer questioned Mundle’s judgment to not realize that his patient was in distress since he had administered extra fluids to her, which would indicate that her physical condition was anything but normal. According to the expert witness in the case, “if [Mundle] had planned accordingly, [he] wouldn’t have had to take [Benard’s] uterus.”

Medical malpractice can happen to anyone. One wrong move by a doctor, one slip up by a medical staffer or hospital personnel can easily lead to a negligent claim against both the care giver, provider and the hospital. Any time a health care professional makes a mistake that could have been avoided had he or she paid more attention or used appropriate medical practice but didn’t, patients may have the grounds to receive some form of compensation for any negative consequences of that doctor’s actions.

If you think that you have suffered damages due to the neglect or failure of a doctor to properly attend to your medical needs, you may have sufficient grounds to receive compensation for any injuries you may have sustained as a result. Don’t wait too long to get a legal evaluation of your potential claim. Be proactive and contact a medical malpractice lawyer to find out if you do indeed have a legitimate claim of medical malpractice.