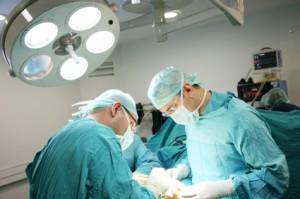 A claimant in New York received a medical malpractice award of $1.3 million recently in response to a lawsuit filed on behalf of a baby who was injured during labour and delivery. The baby was born in March of 2006, when the mother was in her 39th week of pregnancy. Determined to be in active labour at 11 pm on March 8, 2006, the mother was diagnosed with a Strep infection. She was administered an antibiotic during labour and immediately after the administration of the drug began having difficulty pushing.

Background of the Medical Malpractice Case

With two doctors and one nurse present, the mother alleged that one of the attending doctors pushed down on her stomach while the other doctor manipulated the position of the emerging infant. Unfortunately, once the infant’s head emerged, the two doctors realized that the baby’s body was stuck in the birth canal. Born at approximately 3 am in the morning, the baby, according to the mother, was purple/black in color, was generally listless and failed to cry. Moved to a warmer, the baby was determined to have suffered from a shoulder dystocia injury as a result of this difficult birth.

Discharged from hospital two days after delivery, the baby was diagnosed with dysplasia and Erb’s Palsy over the next three months. In addition, the child suffers from visual impairments, cognitive deficits, lack of gross motor skills, and lack of fine motor skills. The lawyers who represented the mother in her medical malpractice lawsuit alleged that the conditions were responsible for the difficult birth of the child, and ultimately caused the birth injury.

According to the medical malpractice lawsuit, the baby’s injuries were the result of a failure by the medical staff present at birth to recognize the need to  deliver the baby via caesarian section, failure to use appropriated lateral force in the delivery of the baby’s head, and failure to timely diagnose and treat the baby’s congenital hip dysplasia. The medical malpractice lawsuit documents alleged that the defendants departed from accepted and good medical practice which resulted in permanent injuries to the infant.

After the presentation of evidence that verified the allegations in the medical malpractice lawsuit, a New York court found in favor of the plaintiffs. While the $1.3 million dollar award cannot begin to compensate for the emotional and physical difficulties faced by the child and his family, it can assist this New York child’s family in providing the medical care necessary to make life a bit easier.