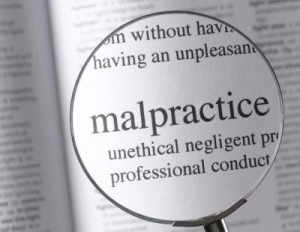 To succeed in a Canadian medical malpractice lawsuit, victims must show that the person or entity they are suing owed the victim a duty of care, that a particular person or entity did not deliver the appropriate standard of care when providing medical assistance, that the injured person’s injury was reasonably foreseeable, and that the healthcare provider breached a duty of care which was the cause of the victim’s injuries. While an error in judgment is something is sometimes unavoidable at some time or another, in the medical field such an error can be deemed to be negligence if it results in injury.

Some of the most common acts of negligence that can lead to a medical malpractice finding include:

• Failure to appropriately attend to a patient

• Failure to diagnosis a patient correctly

• Failure to re-diagnose a patient

• Failure to consult with other healthcare professionals when necessary

The actions of doctors and the conduct of staff that caused injury make hospitals liable under the legal doctrines of direct liability and vicarious liability. This means that if you or a loved one has suffered injury due to medical malpractice, you may file a lawsuit against the staff that caused the injury as well as the hospital that employed that person.

Even with the above-mentioned conflicts, Canada has accumulated a growing amount of case law in the medical malpractice arena, meaning that Canadian juries and courts are becoming more and more open to claims filed against physicians that hold those physicians liable for the act of negligence.

If you or a loved one has suffered injuries due to the actions of a doctor, dentist, or other healthcare professional in Canada, you need an experienced, highly-qualified Ottawa medical malpractice lawyer to represent your interests. Contact a lawyer today to receive a free evaluation of your medical malpractice case.