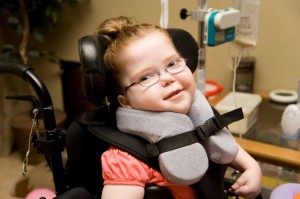 Cerebral palsy is a medical condition that includes a number of neurological disorders that affect muscle coordination and body movement. Caused as a result of injury to fetal brain development or injury during infancy, cerebral palsy is most often the result of a brain injury sustained during the birthing process. In Ottawa alone, it is estimated that 50 cases of cerebral palsy will be diagnosed this
year. Knowing what to look out for during and after delivery in any Ottawa hospital, could mean the difference in your child having the resources to lead a full and relatively normal life or a life of suffering.

Knowing the Signs that Your Infant May Have Cerebral Palsy

Most children who have cerebral palsy are afflicted from birth. However, some cases are not diagnosed for up to three years as the full range of symptoms of the injury may not appear until then. Difficulty eating, walking, and talking as well as symptoms of uncontrollable muscles or of stiff muscles are some of the most often reported indicators for children with cerebral palsy. In infants, the earliest symptoms parents may notice that should be addressed by your pediatrician immediately include:

Once an infant is taken home, other symptoms that may alert you to the possible existence of cerebral palsy include tight muscles and developmental delays. An infant that has not crawled, sat up, tried to stand, or attempted to walk by age one, may need to be evaluated for cerebral palsy. And, while some children with cerebral palsy display developmental signs of cognitive impairment, many are of normal intelligence. Early intervention that includes therapy and treatment is imperative for a child with cerebral palsy to have the best possible chance of living a more normal life.

The cause of cerebral palsy is the result of a brain injury that occurs shortly before, during, or after the delivery process. Unfortunately, the condition is most often the result of an error that occurs during the birthing process in which there is a period of oxygen deprivation. In certain cases, the brain injury that causes cerebral palsy can be directly linked to the failure of the attending physician to recognize the signs that a fetus is in distress and his or her failure to take action quickly enough to prevent a brain
injury. Other times a complicated labor and delivery can cause the injury; and, sadly, even babies born from an uneventful or errorless delivery process can occasionally fall victim to cerebral palsy.

While financial compensation won’t ease the distress of a family with a cerebral palsy child, filing a medical malpractice lawsuit if errors were the cause of your child’s condition could result in some much-needed assistance in dealing with the consequences. A child with cerebral palsy may require special assistance in the form of speech therapy, wheelchairs, walkers, and handicap-equipped vehicles for transportation ease in order to function in the world.

If You Think Your Child May Have Been Injured as the Result of Medical Professional’s Error, Contact
an Experienced Ottawa Medical Malpractice Lawyer