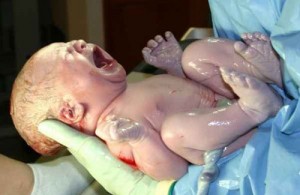 Birth Defects are abnormalities that are present in a baby at birth.  Structural birth defects are characterized by a missing or malformed body part, such as in heart defects or cleft palate.  Metabolic birth defects might be more difficult to see immediately after birth as they are characterized by abnormalities in the body’s biochemical processes.  Phenylketonuria, (PKU), one of the more common metabolic birth defects, affects the body’s ability to process protein normally.

Genetic factors are responsible for some birth defects such as Tay Sachs and Cystic Fibrosis.  Often, a parent can carry a gene for these birth defects without having any symptoms. Those with a history of a genetic disorder in their families may wish to consult with a genetic counsellor before trying to become pregnant.

Environmental factors are responsible for, or contribute to, many birth defects.  Environmental factors that affect the development of the fetus are generally limited to diseases and chemicals to which the mother is exposed during pregnancy.  If the mother is exposed to certain viruses during her pregnancy, the risk of birth defects in the fetus is increased.

While most medications are harmless to the fetus, some medications have been found to increase the risk of birth defects if taken by the mother during pregnancy.  A well-known example of a medication causing birth defects is thalidomide, which was widely prescribed to pregnant women in the late 1950s and early 1960s as it eased morning sickness.  Unfortunately, the drug caused severe birth defects, commonly extreme malformation of the arms and legs.

Exposure of the mother in the workplace to industrial solvents or agricultural pesticides may greatly increase the risk of birth defects.  Workplaces such as the textile or plastics industries, commercial printing, agriculture and scientific laboratories may place women at increased risk of having babies with birth defects.  Women who believe that exposure to chemicals in their workplace may have contributed to their child’s birth defect should consult an experienced personal injury lawyer.