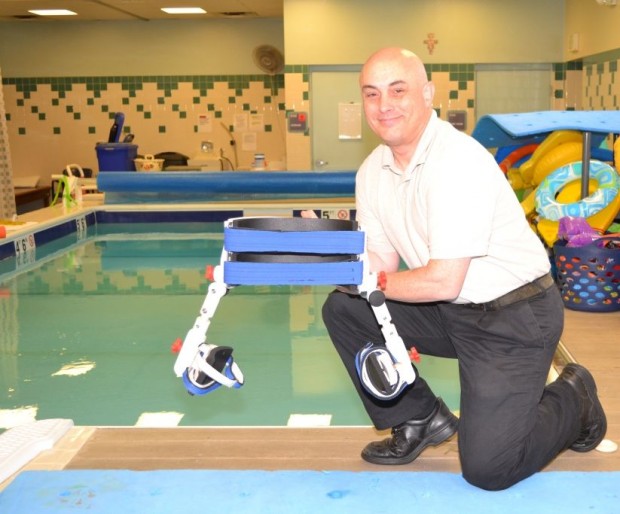 Becoming known as a “magical” invention, David Blaski’s new invention could prove to be a positive life-changing device for cerebral palsy swimmers. A senior clinical occupational therapist at Franciscan Omni Health and Fitness, Blaski, a former magician is the inventor of the device. After meeting a young cerebral palsy patient who loved to be in the water, but whose legs crisscross when in a pool, Blaski made it his goal to develop and patent a solution to the problem and also benefit the development of daily living skills for other cerebral palsy patients.

History of the Invention of the Cerebral Palsy Therapeutic Device

Previous to Blaski’s invention cerebral palsy therapists had lamented that while orthotics existed that reduce leg control for walking, nothing was available for the pool. Noting that some cerebral palsy children have a muscle tone problem that causes scissoring of their legs, Blaski sketched out an idea for the production of an apparatus that would make up for this type of muscle tone malady. With help from his brother, Blaski construed a prototype of his invention and named it the Aquatic Stabilizer Apparatus.

Once the brothers solved the apparatus’ buoyancy challenge, the device has been shown to not only to be of assistance to cerebral palsy patients, but is also useful for resistance swimming for regular swimmers. Currently the device is used at Franciscan Omni Health and Fitness in the therapy of four cerebral palsy children. Winner of the Annual Maddak Award for Best Innovation of the Year (Maddak is the largest US manufacturer of rehabilitative products, Blaski and his brother are hopeful that some manufacturer will take enough interest in the device to fund its production so that other cerebral palsy children may benefit from its use.

Dedicated to being a cerebral palsy therapist, Blaski says that he and his brother don’t want to start their own company in order to manufacture the device as it will take him away from his first passion, which is as a therapist. To keep the product in the limelight and hopefully find a company that wants to manufacture the product for the general public, Blaski is holding an official name competition for the device. The winner of the contest will win a custom fitted Aquatic Stabilizer Apparatus.

Most often the result of a birth injury, cerebral palsy almost always affects sufferers’ ability to move around easily. And for many, water therapy is the only environment where leg movement and exercise is possible. Therapy, rehabilitation, and the learning of daily living skills can be expense. Many times, if cerebral palsy was the result of a birth injury or other accident, patients or their parents can recoup damages from the party responsible for the injury by pursuing compensation through a lawsuit. If you or a loved one suffers from the condition and need legal assistance in the filing of a lawsuit, you may want to consider contacting an experienced personal injury lawyer adept at winning cerebral palsy claims.