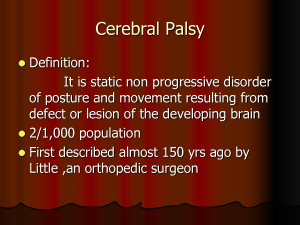 Spastic Hemiplegia Cerebral Palsy, like other types of cerebral palsy occurs as a result of brain damage. Categorized distinctively from other types of cerebral palsy, spastic hemiplegia is a movement defect which affects only one side of the body. Typically, in cases of spastic hemiplegia only the left or right arm and hand is affected, however, occasionally damage extends to the leg on the same side. On average, two thirds of hemiplegia cases are due to some event that occurs during pregnancy. The remaining third of hemiplegia cases are the result of birth trauma or illness.

Children who have hemiplegia cerebral palsy are slow to develop the ability to walk and are noticed to walk on their tip-toes as a result of tight heal tendons. Limbs affected by the disease are many times shorter and thinner than unaffected limbs on the normal side of the body. This abnormality is due to retarded development rather than a lack of spasticity or lack of use issue. In instances where the arm is the affected limb, the child will hold his or her arm rigidly towards the center of the body, with forearm, wrist, and fingers bent and thumb pressed against the palm. In most instances, the child’s arm becomes fixed in this position, rendering the limb useless. Many times, sensory loss in the affected arm is severe enough to cause the affected child to never attempt to use the affected arm at all.

While 20 to 40 percent of all cerebral palsy sufferers suffer from epilepsy, the condition is very common among hemiplegics, resulting in frequent episodes. Hemiplegics who develop epilepsy usually do so by the age of three and as a result receive a poor prognosis for future intelligence. Other problems common to hemiplegics include behavioural problems such as sudden unexplained aggressiveness, hyperactivity (both associated with abnormal EEGs), and epilepsy. In addition, hemiplegics often exhibit delayed language development and display some form of mental retardation due to damage to their speech centers in the affected cerebral hemisphere.

Most physicians recommend that parents of hemiplegic children consult with a psychologist before making decisions about employment or schooling. With the assistance of physicians, psychologists, and therapy, most hemiplegic children can develop the ability to walk and perform activities using the affected hand and arm as a helping hand to their normal side, develop the ability to speak, and learn other life skills. Many hemiplegics are capable of finding productive and interesting work, with those receiving the benefit of therapy and organized care having more success in the job market than those who do not receive such benefits.